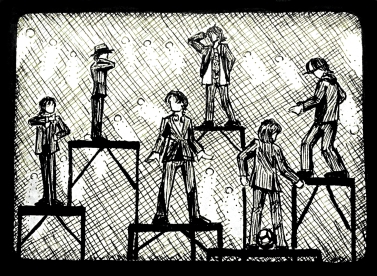 What is it that lies ahead?
Is it hope or dark despair?
Ready now, Round Zero will begin…

Blade’s first opening title sequence makes for an intriguing introduction. The characters pose in monochrome clothes on a harshly-lit, bare pieces of stage; These are players, requesting your attention as they begin to act their roles. Suited Riders spar with nothing but the air, circling each other between tall chained columns, foreboding conflict in an inescapable space. The bikes are placed prominently in the studio, as important to Blade’s Riders as their suits. There’s the possibility of escape and co-operation in the shots of the Riders out on their bikes together. All the while, the key to a significant set of Blade’s symbolism flashes across the screen; Tarot.

Blade’s major motif is  the standard 52 playing card deck, using suits of Spades, Hearts, Diamonds and Clubs. The Latin words flashing across the scene, too quick to properly read but just enough to half-remember, are from the related symbolism system of tarot. The century-old Rider-Waite tarot is the most common meaning system today, and is the one Blade appears to use as a literary device. In the opening, each Rider has a character descriptor shown when they’re on the stage, then over their suited Rider shots comes their representative tarot suit and its corresponding element, and one or two thematic words besides.

Hajime’s words are the easiest to read. SACERDOS, meaning sacred, invokes divinity to set apart from the others. CALIX is Chalice, his rider name and the suit of cups, aligned with the suit of Hearts. It is traditionally regarded as a feminine suit, with a focus on emotions. AQUA is water, his corresponding element. He makes use of it as a motif more comprehensively than the other Riders do, with his henshin using water effects, and with a number of his important scenes taking place in the rain and snow. AMOR and FAMILIA, love and family, are his main preoccupations.

Tachibana is MERCATOR - a merchant, or a mercenary. The tarot suit corresponding to Diamonds is pentacles or coins, rendered here as NUMMI. It is the most material suit, with a focus on money and work. Right from the beginning there’s the implication that Tachibana himself may be bought and sold, setting him up as a possible turncoat. Yet TERRA, earth, is his element, with connotations of being steadfast and nurturing. It fits his Rider name, Garren, which has the meaning of guardian. STATUS is a fitting theme for Tachibana, as someone who is struggling with his health.

Finally, to protagonist Kenzaki, Kamen Rider Blade. He is introduced with PATRICIUS - fatherly, or perhaps, a ruler - but Kenzaki is not in the least patrician in his manner. It makes more sense in the context of his suit. GLADIUS underlines the correlation of the suits of Spades and sword, regarded as the suit of masculinity. The ace is a distillation of its power, associated with the virtue of justice, with authority and truth. AURA is the element of air, ACTIO is action, and TRIUMPH implies success. Victory, action, wind and justice are all iconic parts of a Kamen Rider. If Tachibana embodies the ‘professional’ aspect of professional Kamen Rider concept, Kenzaki doubles down on the ‘Kamen Rider’ part. There will be change in Kenzaki over the course of the show, as there is always change in Kamen Riders, which will square the meaning of PATRICIUS. Not necessarily good change, though; Kamen Riders are tragic figures, and the suit of swords is beset with images of pain. Even in standard playing cards the Ace of Spades in a card privileged above others, carrying the meaning of death.

The lyrics of Round ZERO~BLADE BRAVE are about finding self-confidence, acting despite fear, about defying a ruinous fate - solid heroic themes. EXCITE’s translation is phrased elegantly; never forced into awkward English, but nevertheless emulating the Japanese lyrics’ rhymes and stresses with poetic consideration. The standout line is “Beware the snare of knowing all too much, and the sin of ignorance” (“shiranai to iu tsumi to shirisugiru wana”), with the beware/snare internal rhyme balancing the weight of the idiomatic phrasing of “sin of ignorance”. This will come to bear upon the main characters significantly throughout the show. It touches upon a key franchise concept: A Kamen Rider cannot live blissfully in ignorance of danger threatening the world, because they are a Kamen Rider, and have already been touched by it. Knowledge is ignorance’s opposite, but it’s presented as painful, inescapable and constricting. The following line is a call to action - “You must move ahead, take the step before you can no longer move” (“ugokenaku naru mae ni ugokidasou”) - a Rider must act in opposition to the evil, and here it is crucial to do so not before the enemy can move, but before oneself becomes tangled and paralysed in the anxiety knowledge can inspire. In these two lines Blade’s cards are succinctly laid out; it will now turn them up one by one, and see which win and lose.